Planning to Rent Your Home in Alexandria? Read on.

When the City of Alexandria presented its plan to implement a registry of short-term rentals that will facilitate collection of taxes on those rentals, it was clear that some residents were more concerned about zoning than taxes. In one case, ticked off may be more accurate than concerned.  A woman who lives on South Fairfax Street spoke about her absentee neighbor who rents his home constantly, creating “a complete and utter headache. It’s a continual rotation of strangers,” she said, including some who are making a lot of noise late at night.

The city is not proposing new zoning rules for short-term rentals, unlike Montgomery County, which adopted comprehensive regulations that require notification to neighbors or homeowners association of plans to rent the home and limits rentals to 120 days annually.  Neighboring Arlington County also approved new rules that legalized rentals subject to a few restrictions, including one that targets the absentee landlord issue.  Homeowners in Arlington can rent rooms or the whole unit if they are using the home as their primary residence for 185 days a year and must obtain a license.  Like Montgomery, Arlington caps occupancy at 6 renters per dwelling unit or 2 per bedroom.

Under newly passed state law, localities can require their residents who rent their home (for 30 days or less) to enroll in a registry. In Alexandria, those who rent out their house or condo for 90 days or less will also be subject to the BPOL (business or professional occupancy) tax if they earn more than $100,000 annual gross revenue from the rentals and rent more than four separate dwelling units (each with cooking facilities.)

Due to the threshold, “the BPOL tax is not going to apply in that many cases,” Assistant Finance Director Kevin Greenleaf stated. But other revenue could come in as AirBnB, which accounts for the majority of rentals, has agreed to collect taxes from its users. 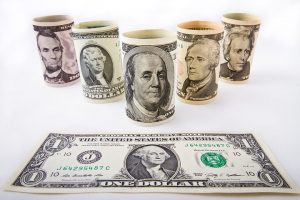 Finding the people who rent out their homes “is not as easy as you think,” Greenleaf said.  Current estimates vary widely, from 100 to 500, a pittance compared to Arlington’s approximately 1,600 rentals.  The city is exploring the use of vendors who employ data analytics to pinpoint individuals who are using online platforms to rent their home.

Representatives from the Holiday Inn (Eisenhower Ave.) and Visit Alexandria praised the city’s plan, which is expected to be implemented starting in 2018, as a way to help even the playing field with hotels, which are subject to taxes as well as numerous zoning regulations.

My two cents — as an occasional AirBnb user and someone who drank the Kool-Aid on tax compliance (6 years working for CPAs does that to you) – renters should pay taxes like hotel guests to make this fairer to hotels.  Granted, hotels in this area are quite expensive, which gives rise to these cheaper rentals but hotel rates also cover the cost of staff, compliance with health and safety rules, and those awesome beds some of them have.
I live in a high-rise so people coming and going doesn’t faze me and I feel bad for people who get “caught” trying to make ends meet by doing this.  But if I lived in a house on a street, a constant stream of strangers in the neighborhood would be unsettling, especially if I had kids.

In any case, I hope if the city does move toward restricting rentals in the future, it’s understood that bad behavior is not a characteristic of many short-term renters; many of us have nightmare neighbors who unfortunately are here to stay.

Planning to Rent Out Your Home in Alexandria?  Here’s what you need to know to stay on the right side of the law (and avoid fines):

Pending:
You will be required to be listed (providing name and address) in the city’s registry or face a $500 penalty for failure to do so.